There are different beliefs about God and what he thinks of gay couples.  Some Christians prayerfully believe that God does not want gay or lesbian couples to marry, for example.  Other Christians prayerfully believe that God is fine with such couples marrying.  Both find good support for their views in the Bible.  Both believe they are doing their best for God.  A few people turn it into hate, and hate isn't OK.

In the Church of England, it's still a difficult subject for some, though recent research shows that the number who are against equal marriage has dropped a lot in recent years. (British Religion in Numbers website). 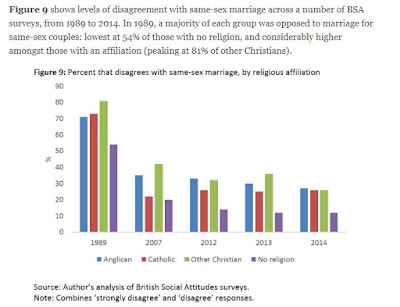 There are huge differences in the answers given by people of different ages. The chart below is from research done by Jayne Ozanne in 2016.

It shows that below age 34, most CofE people are fine with equal marriage.  But over age 55, a majority are not.  That opposition from the over 55s is dropping, too.  But, of course, in many churches, most people are over age 55.  And most powerful people in churches are over age 55.  So we have a church where it's been difficult and sometimes dangerous to be openly gay in some places, for example.

It's useful to see research, I find.  Some would, of course, say that being popular doesn't make something right.  And so we have what will probably be an eternal debate about all of this.

What we do know is that when people get to know a gay or lesbian married couple, living ordinary lives, doing ordinary things like everyone else, as neighbours, work colleagues and friends, they usually can't remember what they were objecting to.

There was a lot of fervour around, "Those Angry Gay People Demanding Their Rights", to use a phrase.  I think it's OK for people to be angry that they are denied marriage before God to the equal adult they love with all their heart, because of who they are.  There's a good blog about 'tone policing' that I'd recommend to people who want to criticise anger about injustice, from minorities.   Tone Policing  [Warning for some strong language and themes]

No anger here, though.  I'm not an angry person.  My concern is love. And safety.

I am one of many people communicating for the autistic population.  About 3 in every 100 people are autistic.  About 2 million in the UK, on the best and most recent workings-out.

And at least 3 out of every 10 autistic people are lesbian, gay, bisexual, transgender, non-binary, queer, asexual, intersex, etc.  In other words, part of the LGBTQ population.  The figure for autistic females is higher, at around half.

Yes, half the autistic women in the country are part of the LGBTQ population.

Autistic people are as likely to be Christians as anyone else.

Now, we have a genuine bit of thinking to do here, as a church.  Because we know that autistic people are often a vulnerable population, with a suicide rate nine times higher than others.  Dying on average at age 54 after a lifetime of difficulties caused by society.  So many are homeless, having been denied jobs as well.  We know that they are routinely targeted for bullying, ostracism, fraud and every other form of crime. We know that the rates of targeting for sexual assault are sky high, to use a phrase.  3 out of every 10 autistic women are victims of rape, for example.

These aren't 'angry activists' and 'dangerous people', storming the gates of your church.  These are largely anxious, frightened and depressed people, trying desperately to survive from one day to the next.  Many understandably fearful of the people around them, for really good reasons.   Communicating using a different body language and spoken language method to you, so often leading to misunderstandings between the two cultures (autistic and non-autistic).

If half of autistic women are part of the LGBTQ communities, struggling to survive, what is our response?  Is our response to lock the church door in their faces, or bring them in for a good bit of condemnation? Or leave them for the nearest predator in the church to prey on?

And is that what God asked us to do?

Or is that bread and wine for all who want to follow Jesus?  In love?  Is that safe fold, watched by the Good Shepherd, only for some of the flock, or for all who yearn to follow Him?

I leave you with the questions.

Thank you for reading, from this autistic member of the LGBTQ community, who follows Jesus, and always will.  If wanting a safe church for autistic people leads people to see me as a warrior, that's OK.   But it's not war I bring.  It's fellowship.  And maybe that's the thing some fear the most....