Autism, ABA and PBS: Some questions 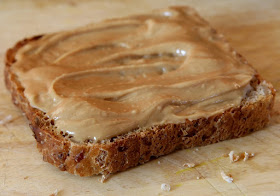 The picture above shows a slice of brown granary bread, spread with peanut butter.
The picture below shows a peanut butter sandwich made from white bread, with the crusts cut off, and with strawberries and grapes on the white plate.  There is a salad garnish on another plate. 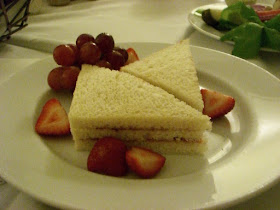 Why am I showing you pictures of peanut butter sandwiches and spreads?  It's going to be an example.

Supposing you are made ill by eating peanuts.  You go to see someone, and they offer you the slice of brown bread with peanut butter on it.  "But I can't eat peanuts - they make me ill".  "Oh, I'm sorry,", says the person, "In that case, how about this sandwich instead?"  They offer you the white bread peanut butter sandwich with the fruit.   "But that's peanuts too.  I can't eat peanuts - it makes me ill", you re-explain.

"This is different", says the host.  "It's not the same thing.  It's got additions, and it is differently arranged. The crusts have been cut off. It's different bread.  It is definitely not the same as the other peanut sandwich".

Rearranging ingredients and putting fancy things with it does not change the basic fact.

So, let's look at another interesting one.  Autism, with Applied Behaviour Analysis, and with Positive Behaviour Support.  I'll call them ABA and PBS.

Both are behaviour modification schemes, designed to analyse the behaviour of autistic people...and change the behaviour.  Both are based on Applied Behaviour Analysis.  We know this from the materials produced by the ABA and PBS specialists.  In the journal, "The Behavior Analyst Today (Vol.10, 3&4) we learn that, "The science on which [ABA and PBS] are based is the same....  The same technology of behavioral science is used by both groups...  We all utilise common procedures...PBS is a natural extension of ABA...the conceptual care and values of PBS and ABA are the same. (Dunlap et al, 2008) "

The two things are equivalent, according to the biggest charity in autism in the UK.

If we look at the training for PBS, it asks the students to study ABA.  The books are ABA.  The materials are ABA.  And there are some additional things as well.  A quick search of the internet reveals endless other sources within the ABA industry explaining that PBS is a variety of ABA.

What about if we made the peanut butter sandwich smaller?  Would that make it safe to eat?

What if we make the ABA component smaller?  Does that make it safe for autistic people?

Let us remind ourselves of the words of a main founder of ABA, Mr Lovaas.

"You see, you start pretty much from scratch when you work with an autistic child.  You have a person in the physical sense - they have hair, a nose and a mouth - but they are not people in the psychological sense.  One way to look at the job of helping autistic kids is to see it as a matter of constructing a person.  You have the raw materials, but you have to build the person".

What a very interesting starting point that was.  Not really a person? Am I not?  Is my son not a person?  What about my husband?  My friends?  My colleagues?  None of us have had therapies.  Perhaps we're therefore not people....?

I've made quite a study of ABA and PBS over the last couple of years.  I know a good number of ABA and PBS practitioners.  I have seen the methods.  I have the training materials.  I have the books.  I have seen the course content.  I'm a professional, working in autism, and autistic.  I work at strategic level with major organisations. A Director of well regarded autism company, whose team include many of the top professionals.  I have trained the Royal College of Psychiarists, alongside my fellow autistic professionals.  We train Psychologists, Psychotherapists, schools, colleges, organisations across the country. We haven't just arrived, new on the scene. We  know what a good therapy should include, (collaborative working, deep understanding of autism, changing the attitudes of those around autistic people) and what is a really bad idea (forcing 100% of the change to come from already-exhausted, and already-distressed autistic people).

I have the current 'best practice' guide for Positive Behaviour Support, used for training the PBS practitioners. In it, one vague and worrying reference to trauma being at the heart of many autistic 'behaviours' - but so vague is this reference that they refer us to a 2012 book designed for learning disability, not autism.  They have simply no idea what the link is to trauma, and they offer no guidance whatsoever.  There is a solitary reference to aids such as noise cancelling headphones, considered a vital beginning for many actual autistic people.  No reference to co-occurring conditions such as Restless Leg Syndrome or Ehlers Danlos Syndrome, both of which can mean the individual has a medical need to move, regularly. Or may have enormous difficulties maintaining one position for any length of time. Simply unexplored.

I think I shall echo the words of the National Autism Project, in their report, "The Autism Dividend":

"Positive Behavioural Support in the form of 'active support' may work for some children and families - but this approach is not suitable for everyone, and indeed is not without controversy".

In fact, as far as anyone can tell, there has been no good long term independent research into the use of PBS and autism.  We have no idea what the impact is of using this behaviour modification approach on autistic individuals in the long term.  It is approved for use with learning disability, and has therefore been assumed OK for autism. But autism is not learning disability.  Autism is different.  Very different indeed.  I've read so many examples of PBS assuming that a child has to be taught to socialise in non-autistic ways.  Taught to socialise through every lunch time, every break time, every after-school event.  If they can socialise just like they're not autistic, they're 'accessing the community', and that is the goal.  "Indistinguishable from our peers".  Perhaps allowed a tiny flap or rock, if that's not inconveniencing anyone else. Did they even want to 'access the community' in the prescribed ways?  Autistic aims and ambitions are different.

Of course, some ABA and PBS practitioners use a set of techniques that doesn't include the problematic core beliefs and aims.  Their version isn't really ABA or PBS at all.   That's not what I mean.  Of course children or adults who are doing something dangerous need to do something that isn't dangerous.  No-one is questioning that.   That is not the subject of this discussion. This discussion is about which approaches are respectful, effective, and appropriate for autism. In collaboration with, designed by, trained by, actual autistic people.   We should be involved in every step of designing and applying therapeutic approaches.

The ABA industry redefined 'dangerous' to include a child putting their head on their shoulder, or moving their fingers, or moving an object a few inches, or stepping over a line on the floor (the latter rebranded as 'elopement').  All of that is recorded as evidence of 'success' if prevented.

The US Government reports that the vast majority of parents can't see any meaningful change.  Little wonder, eh.  https://www.altteaching.org/wp-content/uploads/2019/11/TRICARE-Autism-Report.pdf

I understand that the Westminster  Commission in the UK was looking at this matter.  I would suggest that ABA and PBS needs some very thorough and continuing research.  Because we are gambling with the lives of an awful lot of children.   The suicide rates for autism are already stratospheric.  I note the legal cases in the USA from some individuals who believe they were deeply damaged by some therapies.  If we're wrong, and we are in effect doing the same thing as the highly discredited and damaging 'gay conversion therapy'.... we are setting an awful lot of children up to have serious consequences later in life.  No matter how 'positive' the title of the product.  If an autistic person wishes to have ABA or PBS, and it is their personal, considered choice, great.  No problem with that.

How sure are you that this the right therapy?  I shall leave you to investigate for yourselves.  Read the words of autistic adults who have expressed their views on ABA.  http://neurodiversitymatters.com/autisticacademic/2017/03/16/another-blog-post-on-how-aba-ruined-an-autistic-persons-life/ is one example of thousands. https://sociallyanxiousadvocate.wordpress.com/2015/05/22/why-i-left-aba/ is another. Some are more positive about it.  But it depends how confident we feel in saying that the many negative accounts are not important.  It depends how confident we feel that the local offering has nothing damaging in it.  With so little research, we're guessing, I would say.

https://theaspergian.com/2019/03/28/invisible-abuse-aba-and-the-things-only-autistic-people-can-see/ may be helpful also.

Decide if adding things to ABA makes it harmless.   If the 'key ingredient' of both systems is the belief that we are (in effect) behaviours that need to be modified, to make us like other people, is that a good thing?  On what set of measures is it a good thing?  Are autistic people broken versions of 'real people', or are we a neurodiversity?  ABA and PBS largely assume the former.  The emerging autistic communities assume the latter.

Was it a good thing to make gay people pretend to be straight?  To ensure that they had access to the straight community and could lead 'normal' lives?  To 'prevent them being bullied'?  To 'ensure they could have the same things as others'?   No.

If you say to an autistic person, "This is a good thing", and you are a professional in a position of power over them, are they going to trust you?  Are they going to agree with you that it must be a good thing?  After all, you said it was.  Very literal people, autistic people.  Very likely to assume that others are saying things that are accurate.  Very likely to believe them. Generalising, of course.

That's a lot of power to have over autistic lives, isn't it?

The Autistic Not Weird website by Chris Bonnello ran a major survey with thousands of respondents.  https://autisticnotweird.com/2018survey/ This is a typical example of the findings around ABA-based therapies.  Less than 5% of autistic people approved of their use on children. Do we hold that almost no autistic people know what's good for them?  That must be our assertion, if we are to ignore this.  How confident are we with that assertion?

I leave you with those reflections.  And I look forward to professional discussions with colleagues nationally on this subject.

We need better answers than, "PBS isn't the same as ABA".

Seek out respectful answers.  Listen to autistic people on what matters to us.