Autism is not a look or a behaviour. About enforcing 'Masking'. 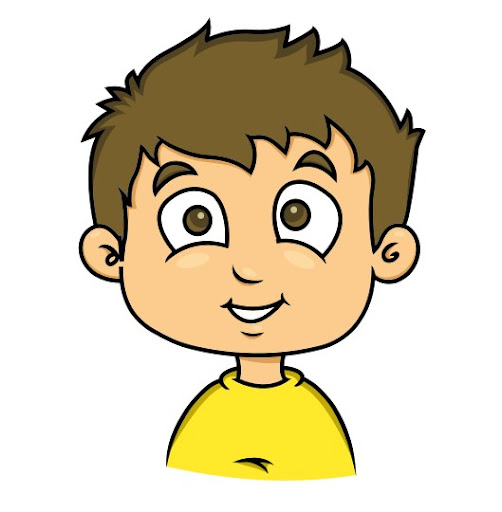 In the press, news that a team have found a way to give fewer diagnoses to autistic children.

The alleged therapy appears to be based on ignoring a young child if they behave autistically, or giving them a 'time out' for doing so.  Parents are taught to reward any behaviour that matches non-autistic social skills, such as eye contact, waving when someone else waves, etc.  The end result is to deliver to the parent one child who appears normal and can make eye contact.  Like the picture at the top.

"This is the first worldwide evidence that a pre-emptive intervention can reduce autism behaviours and the likelihood of a later diagnosis,” said Prof Jonathan Green at the University of Manchester, breathless with excitement.  OK, I may have added the 'breathless with excitement' bit.  But that's the general tone of the Press - that if we can 'reduce autism behaviours' we can stop the autistic children getting a diagnosis, and isn't that fantastic!

OK.  Reality check.  I asked autistic people if they had stopped being autistic, once they learned to do eye contact, waving, etc. 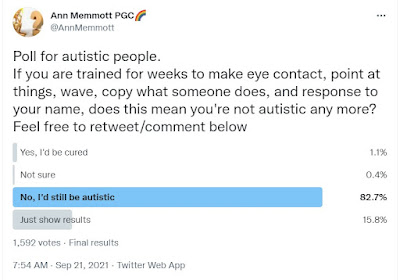 That's odd, isn't it.  There's over 1000 votes.  Hardly more than a handful thought that doing those things means they're now cured of autism.  No, they'd still be autistic.
So what on earth is going on?  Other Press articles suggest that perhaps they wouldn't develop 'full blown autism' if they learned to hide being autistic.  What? Is that even supposed to make sense?  There's not even a diagnostic category of 'full blown autism'.  We're either autistic, or we're not.
There are so many problems with this allegedly exciting new research, I and other professionals barely know where to begin.
Autism is not a 'look'.  It is not a 'behaviour'.  It is a different neurology and we are born with it, from all the evidence to hand.
Training autistic children to appear nonautistic is called training them to 'mask' or 'camouflage' their natural and normal behaviour, and replace it with inauthentic, exhausting mimicking of others, all day, every day.
The end result of that is not happiness.   It is misery.  Misery to such a degree that we now know from research that there are links to suicide. Reference and so many more modern research papers can be found in http://annsautism.blogspot.com/2019/01/autism-some-vital-research-links.html
Brand new research details the narratives around how 'masking' leads to autistic burnout and other mental health crises. Here's the link to the article, which also discusses the other awful outcomes of enforced normalisation:  Autistic burnout
So, our triumph is to stop autistic children being diagnosed, is it?  Getting help and support, finding their peers, learning who they are?  That's good, is it?
Because autism is some terrible thing that needs hiding, is it?
Who says so?
For sure some autistic people have a tough life, with multiple difficulties. A life that needs a lot of support. A life that may need medical assistance for actual medical situations such as epilepsy, or pain/mobility conditions such as Ehlers Danlos (both of which can co-exist in autistic people).  But in what way is preventing a diagnosis a fantastic idea?  So we can fail to support them?  So we can make them exhausted from masking as well as struggling?
This is recklessness, not triumph.  It's wrecking children's lives.
And it has no place in a modern society.
The Medical Professions are tasked to do no harm.  To put the rights of the child at the forefront of their thinking.  To uphold Human Rights legislation such as the Convention on the Rights of Persons with Disabilities (CRPD) which says that autistic children have the right to their autistic identity.  I'm not sure people even read that document, let alone uphold the very principles our Country signed up to.
Condemning young children to a life of poor outcomes, so others can be pleased that they 'look normal' or don't have 'full blown autism' (the sort where we are visibly autistic, shock!)  is an act of terrible cruelty, and I suggest that we never, ever do it again. 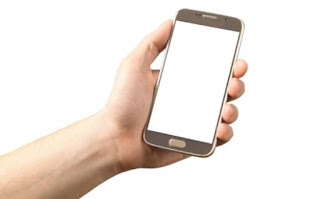 There's a lot of misunderstanding about autistic people, and phone calls.

Unfortunately, not a lot of people know this.  So there can be major difficulties with people misunderstanding what's happening.

Equally unfortunately, people expect us to use phones reliably.

Lots of autistic people can only sometimes use phones.  It's a major barrier to healthcare, to job success, to getting basic services and basic human rights.  It's great when companies and organisations know the law, want to work with us, and create different ways to interact.  Text.  Email.  Webchat.  Timed called with a known person.  Anything that works for us as individuals.

But, too often, what we get is a sort of a 'gotcha!' from people who don't understand.  "Ha, you could phone yesterday - you're a liar!".  Same principle as the ones who follow wheelchair users round a store to see if they can stand for a while (most can...the chair is to save energy, extend the range of where people can go. and help with balance, for many health conditions including heart situations, connective tissue conditions and joint problems). If they're seen standing or taking a couple of steps, some arguably unwell or ignorant people get a thrill out of saying that 'gotcha!'

Disabled people have to work very very hard to get the same things as everyone else.  And explain, endlessly, to everyone around us.  Exhausting.  Hour after hour.  Day after day.

Even if we pay for services ourselves, we're often expected to put up with shoddy service and appalling treatment.  Even if it could lead to injury or other danger for us.

And, if we complain, we're accused of Taking Services Away From People That Really Need Them.

Let's do better, together.  Be knowledgeable about how many autistic people may struggle to speak, sometimes or always.  Be aware how many will struggle with phone calls, and being able to say what we need during them.  Be willing to help make changes so that we can survive, and thrive, the same as other people.