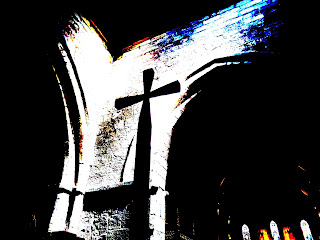 The Church of England is deep in debate about Trans lives.  Their 'Parliament', General Synod, had asked that the church consider services for Trans individuals.  That was voted for by a huge majority of the Synod members.

We now learn that a small group of Bishops has decided that will not happen, without reference to any of the Trans Priests and advocates involved.  A mystery indeed. This may be helpful as a commentary.

Why is this anything to do with autism?  Because...

There are two million autistic parishioners in the country.
Autistic people are as likely to be Christians, and want to go to church, as anyone else.  Many already do.  Some are our leaders now.  Or in our choirs, our pastoral teams, our musical groups, our PCCs, our Synod.
Autistic people are more than seven times as likely to be Trans as other people.
A full 30%+ of autistic people in the country are part of the LGBTQ communities.  That is some 600,000 people. No, really.

Why is it anything to do with safeguarding?
Autistic people are amongst the most marginalised and 'at risk' groups in the country.  Autistic individuals die, on average, 16 years early, because of the horrific lives many are forced to live.  Little access to healthcare.  Little access to social opportunity.  Little access to love, to friendship, to fellowship, to being able to share their gifts and humanity with others.
Autistic people are nine times as likely to take their own lives, because of how bad a quality of life they endure.
8 out of 10 autistic people endure extremes of bullying and poverty, often because of myths and misinformation, trying to link all autistic people to a tiny number of 'shock headlines'.
Most autistic people struggle to identify who is a friend and who is a predator.
It becomes a safeguarding matter when those battered and bruised - spiritually, emotionally, physically, sexually - stagger to the door of church, and find it shut in their faces.  With the people inside saying, "You're nothing to do with us".  Or... make it inside to find a barrage of hate, othering and ostracism.    That final straw...and such a missed opportunity for the congregation and leadership to find a new friend, a new prayer partner, a new pair of hands to help share all the load within the church.

Why it is anything to do with Jesus?

Because Jesus, it appears, had an autistic friend, Nicodemus.  Approaching Jesus in the quiet of night, misunderstanding metaphor.  Jesus helped him to understand.  He didn't tell him to go away.  He didn't tell him it was too much bother, too much cost.  There was Nicodemus, reaching for a rule book to try to solve a tricky social dilemma and danger for Jesus.  Staggering up a hill with an imponderable and socially-awkward amount of herbs and spices, to Jesus's tomb.  We cannot 'diagnose' people no longer alive, but we can affirm the autistic-like nature of Nicodemus.  Still as autistic at the end, still a friend of Jesus.

We know we're made by God.  Part of the Body of Christ.  Loved as the honest, dedicated and justice-seeking people we are.

We know that many of our number are gay, lesbian, bisexual, trans, non-binary...and many other identifiers.  A rainbow of diversity.  Each bringing a piece of that-which-God-has-created.  Each, a vital part of the picture of humanity.

We need to do better than to leave some of the most vulnerable outside, as too much bother, too much cost, too 'scary'?  Did Jesus not say that the good shepherd goes in search  of the lost sheep?

As one of the country's leading autism experts, my life has been so blessed with meeting autistic people of every kind, every gender identity and sexuality, every faith and of no faith.  Each loved by God. Goodness me these are fantastic people.  I'm autistic and part of that same community.  Such depth of faith in God, such depth of love for others.


The picture is of a Cross in a church.