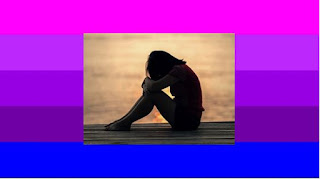 Warning for discussion of suicide.

Long, happy, healthy lives.  It's something we want for all autistic people, I think we can agree?  Yet we know from recent research that the suicide rate for autistic people is huge.

For a discussion of this, see for example https://molecularautism.biomedcentral.com/articles/10.1186/s13229-018-0226-4 which talks about the underlying reasons for this, and includes the deeply concerning statistic that, " In a large sample of 374 adults newly diagnosed with.. autism.., 66% had contemplated suicide".   Risk factors included having to disguise autistic identity (camouflaging/masking).  Why hide our autistic identity?  Fear of bullying, ostracism, prejudice, desperation to make friends in a world too eager to see autistic people as 'broken' instead of a minority who use a different communication system and usually have a diffferent sensory system.

What of the large numbers of autistic people who identify as part of the Transgender or non-binary communities?  What is it like for them in a world also often hostile to Trans individuals and those of other minority gender identities?

If you want to do a bit of background reading on those gender terms, I would recommend the glossary at this linkAre there large numbers of autistic people who are gender-diverse?  Yes.

We know this from recent research.  For example that by George & Stokes, an example above.  Top bar shows the chosen gender identity of autistic people who were described as as female when born.   Bottom bar shows the gender identity for 'typically developing' (non-autistic) people who were described as female when born.  Blue = still identify as a woman. Other colours - not now identifying as a woman.  That's a big proportion of the autistic people who are not identifying as 'woman'.

What are lives like for autistic people who are part of gender minority groups, though?  Again, we have a growing amount of research on this.  https://link.springer.com/article/10.1007/s10803-018-3723-6 is one new article (2018) describing the personal accounts of 22 individuals, and well worth a careful read.


https://link.springer.com/article/10.1007%2Fs10803-018-3469-1 is an important new paper by George & Stokes (2018).  It looks at the mental health outcomes from autistic people who are in sexual and gender minority groups, and of non-autistic people.  Big numbers surveyed.   It's not good news.  Let's have a look at some of what they discovered, on the graph below.

First, what do the abbreviations really mean?  TD = non-autistic.  ASD = autistic.  GDT = gender minority group e.g. Trans, non-binary. (I call this gender-diverse in this blog).
The scale of numbers across the top starts from 0 (extremely good mental health) to 20+ (increasingly poor mental health).
People who are not autistic scored about 7.5 on average. Pretty good mental health on average.
Non-autistic people who are gender-diverse, average score about 16.  Not so good.
Autistic people who are gender diverse, average score about 20-ish.  Really not good.  Perhaps predictably, being a member of more than one minority group means more stress in an often non-accepting society, and thus more mental health difficulty. 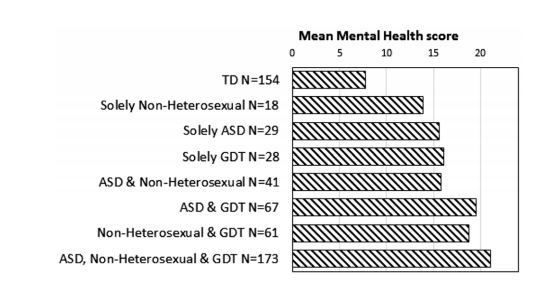 Why are there greater mental health stresses on autistic people from gender-minority groups?  To quote from the research paper,

"The increased rates of mental health problems in these minority populations are often a consequence of the stigma and marginalisation attached to living outside mainstream sociocultural norms (Meyer 2003). This stigma can lead to what Meyer (2003) refers to as ‘minority stress’. This stress could come from external adverse events, which among other
forms of victimization could include verbal abuse, acts of violence, sexual assault by a known or unknown person, reduced opportunities for employment and medical care,
and harassment from persons in positions of authority (Sandfort et al. 2007)."

Does transition (GCT: hormones, surgery etc to align the body with their gender identity) lead to better outcomes?  A starting point may be this recent paper, looking at results from 697 Trans individuals, which says, "Body-gender congruence and body image satisfaction were higher, and depression and anxiety were lower among individuals who had more extensive GCT compared to those who received less treatment or no treatment at all".

What is certain is that we need to work together, and well, as different communities.  To support one another.  We need to learn about different aspects of gender diversity and autism, and to find really good ways to lessen the stress on autistic gender-minority people.

There is no doubt that individuals who are autistic and are part of gender minority groups are at high risk of very poor outcomes, and major misunderstandings.  Listening carefully to those individuals, and to the best of the charities and groups who offer excellent support and education services, is really important.

Thank you for listening.