Autism and The Myths around Violence

Above, a photo that is fairly typical for a group of autistic children.  Sitting peacefully, reading.  If you suspect I'm wrong, read on.  In fact, read on anyway....

We've had some strange myths that autistic children and young people ("CYP") are, on average, more violent than non-autistic CYP.

Let's look at the research.

First of all, about 1 in 30 CYP is autistic. All IQs, all genders, all ethnicities, faiths and backgrounds, and all sorts of different personalities.

Second, most autistic people care deeply about others.

If you want a run-through some modern general research on autism, rather than the stuff dredged up from the 1940s, I'd recommend the papers in https://annsautism.blogspot.com/2019/01/autism-some-vital-research-links.html which talk about lots of new findings.  About honesty, integrity, the reason that our senses are different, & about why we need what we need...
And why a combination of bullying, ostracism and some approaches to 'dealing' with us have been an utter disaster which caused immense pain and distress.  Pain and distress in life is so bad that 6 out of 10 autistic people report symptoms of Post Traumatic Stress Disorder at some point in life, from the latest study.  Remember, if you will, that it's the autistic people who are supposed to be the problem...

So, where did this idea come from, that we were more likely to be violent?

OK, let's look at what this research paper says.  There were 1380 children age about 9 yrs old. They were part of a group where the parents were seeking support, so presumably had behaviours of concern already.  That's an important thing to remember.  This isn't 'all the autistic children in the country'.

Nearly all of them were male, which is odd.  Nearly 9 out of 10, in fact.
Their average IQ was 15 points below the average for the country, with some well into the range of learning disability.  So, this doesn't tell us a lot about females. In fact, it tells us nothing, as the researchers didn't separate out the info for females.

Let's start by recalling our own behaviour as a child.
Be honest with yourself: Did you ever, even once, push, shove, barge past, elbow, or hit another child, e.g. a brother, sister, someone in the playground? Oh my!  In that case, you are Violent.  Did you know that?

OK, let's look at their findings.  They divided the answers into four groups.  Here's the ones for the autistic CYP's aggressiveness to their caregiver (Mum, Dad, etc).

They looked at whether CYP level of actual violent behaviour of any kind was the same in different years, and noticed that by age 15-17, only about 25 out of 100 were showing any such difficulties, so three quarters were not.

The team didn't consider why the CYP might have hit out at someone, perhaps once in a lifetime.
Was it extreme pain?
Was it fear?
Was it emotional distress?
Was it utter exhaustion after barely sleeping for weeks?
Was it during a meltdown, which is strongly linked to electrical 'spikes' in the brain activity and seems to be a brain event, not any sort of actual deliberate planned aggression?
Was it actually self defence, but the parent hadn't realised it?
Was it in fact another health condition, etc that was to blame, not autism?  We're not told how many of the CYP also had ADHD, or conduct disorder, or a mental health condition.  Learning disability wasn't really factored in either, and we're told nothing about whether communication was enabled.  Not being able to communicate, and not being listened to, is such a source of anxiety for so many.
We weren't there for any of the incidents, so we have no idea what actually happened.  And we don't know whether it was in fact autism that 'caused' any of this.

And, this is 2010.  10 years ago, when we had found only a fraction of the autistic children.  Not most of the girls, not most of those from the BAME communities, not those who are quieter, not those who 'mask' their autism, so go unnoticed, peacefully. So many who were never in this paper.

What we have is a whole set of unknowns in this research paper.
What we do know is that nearly all of the autistic CYP in this curious bunch who were picked for this study were peaceful. Nearly 7 out of 10.

What we don't know from that paper is whether non-autistic children are less violent.  Like most studies, the researchers didn't bother to find out.  What was important was claiming that autism equals more violence, it seems. (I grow weary with the negative narrative about us.  Can you tell?)

Let's look at whether non-autistic children are violent.
https://www.ncbi.nlm.nih.gov/pmc/articles/PMC3283570/pdf/nihms2126.pdf is a good starting point, by Tremblay and colleagues, 2004.

"By 17 months of age, the large majority of children are physically aggressive toward siblings, peers, and adults".Oh dear.  That rather spoils the picture of autistic children being the more violent ones, doesn't it.

So, only 14 out of 100 non-autistic children in this younger age group were peaceful, and the rest were being physically aggressive.  Remember the study for the autistic CYP asks if they have *ever* been aggressive.  Their figure was 44 out of 100, not 14 out of 100.

The autistic children are more peaceful overall, based on these two studies. It's not a fabulous match, of course, since the autistic CYP are older, in their study.

So, what else can we find to prove this allegation that autistic people are more violent, in some way?https://www.sciencedirect.com/science/article/abs/pii/S0890856717301508 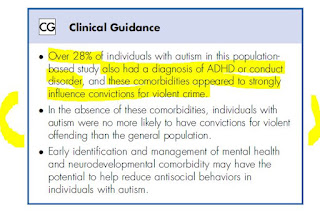 is a 2017 paper from a huge set of info in Sweden.  It looked at whether autistic people had more criminal records for violence.  Nope.   28 out of 100 of the autistic people also had a diagnosis of ADHD and/or Conduct Disorder. The study found that those, not autism, were linked to crime.   If an autistic person had neither, they were no more likely to be violent than anyone else.I've worked amongst autistic people for decades.
I've never met a more peaceful group, on average.  Many working in dedicated ways as (e.g.) Doctors, faith leaders, Nurses, care workers, parents, volunteers, academics, engineers, retail workers, etc. Peacefully, collaboratively.  Others unable to work for various reasons, and enjoying life in peaceful ways in various places.  A few, desperately in pain and showing huge distress behaviour that may appear to be 'violence'.

If you had a friend who is diabetic, and they went into a diabetic episode where their behaviour became erratic for a bit and they pushed you out of the way, would you think of them as a nasty violent person that you didn't want in your life?  What about a friend who went into an epileptic seizure and kicked out whilst in the middle of that?  Are they a nasty violent person?

That link is a bracing NSPCC report into how many children and young people of all kinds experience violence and worse from some parents and carers in the UK.  Between 40 and 50 out of every 100, at some point.
And autistic CYP are still more peaceful than other people, on average.  I say well done to the autistic individuals.

Exceptions apply, of course.  In any population of people - autistic or not - there will be some who are violent.  And, if any CYP is violent, obviously there needs to be proper thought put into why.  That's why autistic specialists work with parents and teams, to help find answers. To help spot triggers for events that perhaps others have missed.  All people who need support should get it.

But for sure I am mighty fed up with the narrative that autistic people are more violent.  That leads too many parents to say they don't want an autistic child, because such a child is going to hit them.  Actually, less likely than a non-autistic child doing so, it seems. On average.

It leads to too many groups throwing out autistic people 'in case we're violent'.

It leads to lost jobs, lost relationships, lost confidence, lost friendship opportunities, loneliness, and onto very poor outcomes around mental health and (for too many) wishing to take their own lives.

These are just starting points.  This isn't a formal essay.

But goodness me, they're important bit of information to think about, aren't they.


Thank you for reading.