What follows is not formal research.  It's very interesting, though.  On social media, one can ask questions of those who happen to be reading what you're writing, on that particular platform, e.g. Twitter.

These polls can show some intriguing results, especially for considering what autistic people might like in their lives.  Few ask us.

There is often an assumption that we must consider ourselves to be broken, in need of fixing.  Desperate to be normalised.  Keen to only 'speak' the social communication language of non-autistic people, never our own natural language.  Are these things actually true, though?

Formal research is important, but nearly all of it keeps focusing on the belief that we're broken.  So, it's not helpful for most of us, at all.  Exceptions apply.

Let's have a look at what some of the polls show.

Here's our first one. Do autistic people generally care what happens to other people in our lives?  949 votes.  Huge amount said yes, they do.
What about sexuality and gender?  A useful big poll here:

Yes, you're not imagining that.  Three quarters of the autistic people responding to Pete's poll on Twitter said they have a different sexuality/gender to the standard expectation in society.   That's a pretty large number, eh?

A sobering one, next.  The alleged 'gold standard' of autism compliance-training (such as Applied Behaviour Analysis and forms of Positive Behaviour Support) involves taking a child's favourite things away to use as bribery to get them to appear to be 'normal'.  Usually, to disguise distress, pain and exhaustion, stop using vital repetitive behaviour, and comply with anything they are told to do.  This has been regarded as a really good thing. Let's look at whether autistic people think about this: 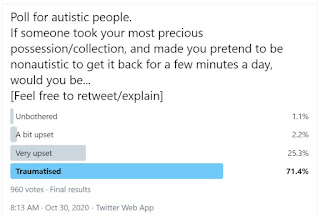 So, that's just under 1000 votes, the vast majority choosing 'traumatised' rather than very upset or a bit upset, or unbothered.  I see it done to adults in care, also, who have to sit in empty rooms, with every possession removed.

If you're not feeling worried about what's been going on, well, you should be.  What on earth has been happening to the autistic people?  Original thread on Twitter and many comments under it - here:  https://twitter.com/AnnMemmott/status/1322089326533087232

Big number answering regarding their views of Applied Behaviour Analysis:  Nearly every one of the thousand autistic people answering this said they thought it wasn't helpful for autistic people.

This one had 491 votes and was about whether autistic people can use spoken language reliably.  Most could, but quite a few cannot use it reliably, and a smaller number couldn't use it at all.  Important to remember when preparing research, eh. How are you making your question answering possible?
Moving on...

This one had 885 votes, and was about autistic shutdown and meltdown.  Shutdown - when very overloaded with sensory/social stuff, the brain goes into emergency 'shutdown' and switches off most communication, movement, etc.  Very unpleasant to experience, and why we are so careful to avoid those triggers.  Meltdown - a brain event with same reasons, but behaviour becomes loud and random for a while.  Not a temper tantrum.  Most assumed that autistic people only have meltdowns.  Nope.  Most only/mostly have shutdowns.  They look quiet and peaceful.  It's no wonder we failed to diagnose most autistic people, eh.

OK, next, with 1468 votes, whether autistic people want people to experiment on children using drugs to see if it normalises their social skills.  Strongly no. 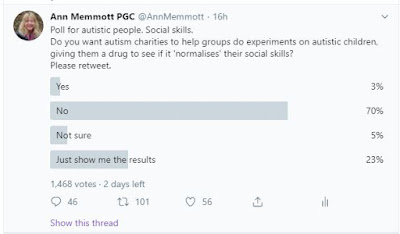 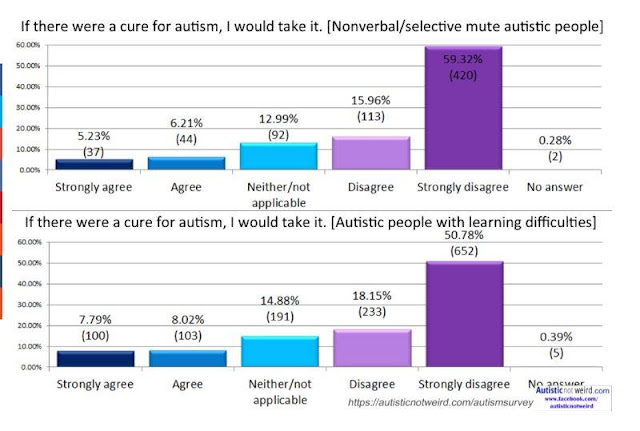 This one is from https://autisticnotweird.com/2018survey/ and asked a very large number of autistic people many interesting questions.  One of them is shown above.  If there was a cure for autism, would they take it?  I've chosen the results for those who do not use spoken language much/at all, and those who have learning difficulties.  Two groups who are assumed to want a cure.  No, they generally don't.  Nearly 70 out of every 100 a definite no.  Only at most 15 out of 100 might consider it.  So, what are we doing when we aim for a cure?  Whose lives are we prioritising?  Those of autistic people?  Or the convenience of others?  What are our ethical choices here, given the right of disabled people to choose their own best lives?  Yes, it's a formal Human Right, and it's in the laws most countries have signed up to (UN Convention on the Rights of Persons with Disabilities (CRPD) )
There is a new Autistic Not Weird Survey results page out at https://autisticnotweird.com/autismsurvey/ with thousands more autistic people from all over the world answering its questions, including those with academic learning disabilities and those who do not use spoken language reliably/at all.  Go look.

649 votes.  Taking out those that said 'just shown the results', three quarters of the people responding said no, they did not want autistic people to receive PBS.

So, why is it the standard approach?  It's as if few people ever asks autistic people about things.
I do.
Lots to think about, isn't there. 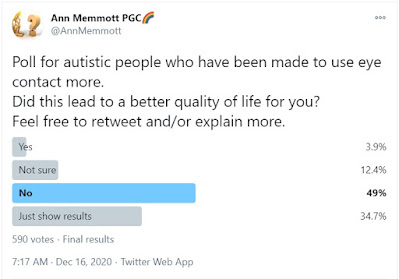 Above, another useful one.  Does making eye contact with others lead to a better quality of life for autistic people?  Generally no.  In fact, lots of no.  Hundreds of responses.  So why are we enforcing it?
What about sensory difficulties?  We hear that some autism 'experts' claim sensory difficulties aren't actually a real part of many autistic lives.  Well, here's a big poll result.  Nearly 2000 people voting in total, though 11% of those just wanted to see the answers.  Nearly every autistic person voting said they had one or more sensory difficulties bad enough to cause them distress, when others seemed unbothered by those things.  Mmm....so, not part of autism, eh? 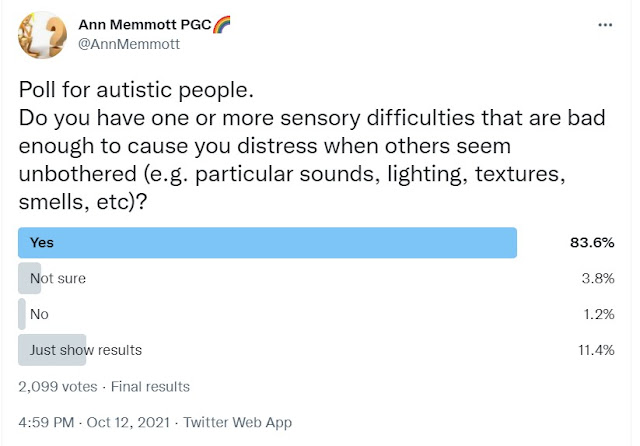 Here's our next surprise.  Is "restricted and repetitive behaviour" in fact often or sometimes because we're trying to avoid sensory overload?  Overload that might push us into a painful, exhausting brain event such as meltdown or shutdown?  Why yes, it is.  And yet on a regularly basis I see academic papers saying there's no link, honest guv.  Did they just make that alleged fact up?  I think so.  Who asked the autistic people about this?  This is why doing environmental 'audits' to check for sensory hazards can make such a difference to autistic lives. 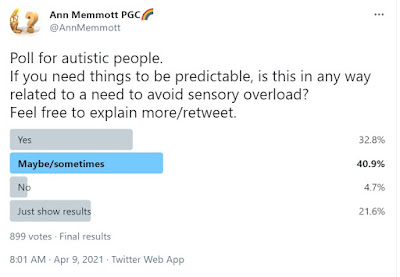 Sometimes, I get people saying, "But Ann, what about the Real autistic people - you know, the ones in a care home?".  There are indeed autistic people with high support needs, though they are no more or less real than the rest of us.  There is no evidence that their views differ so far.  I'd suggest you go and ask them.  Then you'd know.

It appears that only 15 out of every 100 autistic people has a learning disability. https://bmjopen.bmj.com/content/9/8/e029040.full?fbclid=IwAR1c5qMgMj5JQlXpVb7SNTAEybf6WZnih34Fhunfa1pCvWCx0pbU6aHINMc
Most of those individuals would have a 'mild' learning disability that doesn't stop them using social media, writing, and answering things.  Almost all can communicate their wishes, if enabled to do so.  Do we enable them to do so?  Why not?
Do neurodiversity supporters just not care about autistic people with higher support needs?

What about cost?  The myth that nearly all autistic people sit around being a Burden to Society and costing $billions?  Well, it would help if we had found most autistic people, in order to get meaningful answers to that.  But we were only locating the ones with higher support needs.  Embarrassing, really.  It's improving.  We have some emerging info, though.  This, by Beth Noble in the published Masters paper, showing what 83 autistic people were doing. It's similar to a lot of other studies happening. A different pattern, but most are employed, self employed, students, retired or carers. Very few are out of work.  Certainly many autistic people are underemployed because of prejudice or lack of simple cheap support.  A few really cannot work, and that's understandable, of course.  It's difficult to see how this matches with the idea of us all being this Huge Burden, eh.  Being clear that a person's worth is not defined by the contents of their bank account.  All human beings are of the same worth, equally deserving of a good life and their human rights.
More about employment at https://annsautism.blogspot.com/2018/04/autism-mythbusting-employment.html

What about the environment?  One study recently alleged that we don't do enough for the planet, and might want to have therapy to make us better citizens.  No, I'm not inventing that. Unfortunately their research method forgot to ask actual autistic people, and forgot to ask what we actually do about it.  An easy mistake to make, I'm sure. Original twitter link to this
This poll showed that nearly every autistic voter said yes, they care about the planet's environment. 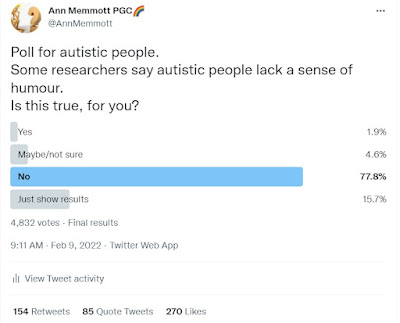 I hope that this has been interesting.  It's mostly not "science", though some of the above is from formal survey and academic research. But, life isn't 'science', is it.  If we want autistic people to only exist in a test tube, go ask scientists about us.  Otherwise, ask us.

There's plenty more polls and surveys from autistic people.  As I say, I wish there was indeed more research happening that asked autistic people what we want for our own lives.  We're not the possessions of other people.  We have our own Human Rights, including the right to our own identity.

What I'd like is for research teams to have a read, have a think, look hard at what they're doing, and challenge themselves.  Is this what autistic people actually want?  What information have I been given, and is it actually true, or was it based on ancient info gathered from a group of young men with high support needs?  Have people always just assumed this approach is OK, because someone with a clipboard or a book contract told them so?

Always work as equals with autistic specialists and advisers.  It's a good way to ensure that you are respecting autistic lives, cultures and communication patterns.  And, most importantly, valuing what we want from our lives.

Thank you for reading.
https://annsautism.blogspot.com/2019/01/autism-some-vital-research-links.html for more of the modern research that changes most of what we thought we knew about autism